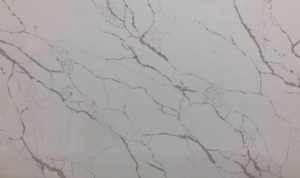 WHAT IS CALACATTA LAZA?

Calacatta Laza  is the most popular quartz color by MSI Q Quartz. It is even possible to say that it is the best selling quartz even among the other quartz brands such as Cambria Quartz, Silestone Quartz, Hanstone Quartz, Corian quartz, Pental Quartz, Wilsonart quartz and many others.
There are multiple reasons why Calacatta Laza quartz has been the best selling quartz in the last few years;

A lot of quartz in the market has veining in them which are either too straight lines, too bold lines, too thin lines unlike natural marble veining. Calacatta Laza is one of the stone that resembles the natural marble veining well. The lines are not too bold, not too thin. Would you like to know what other quartz has veining that is similar to true marble veining? Check out goldvein quartz, and Calacatta Monaco quartz.
BROWN TONES ON CALACATTA LAZA QUARTZ
Most quartz in the market have just white and gray tones but no earth tones to bring things together with older style kitchen cabinetry like Maple, Oak or Cherry. Calacatta Laza has some brown tones that sets it apart from most other quartz which has only white and gray coloring in it.

HOW MUCH IS CALACATTA LAZA QUARTZ?

WHAT COLOR IS CALACATTA LAZA QUARTZ?

Calacatta Laza quartz has a white background color, gray and brown patterning in it.

HOW MUCH DOES MSI QUARTZ COST?

MSI Quartz price is between $40 to $100 sq. ft. installed depending on the color and project details. Please note that the price could be even more if the fabricator does not have the certain color in stock, and/or if your job is small and does not utilize the slab well.

WHAT IS THE SIZE OF CALACATTA LAZA QUARTZ?